Biorefinery of renewable feedstocks via syngas and H2/CO2

Biogas production from renewable resources, and then…?

The need for renewable fuels and industrial bulk substrates is escalating because fossil resources are finite and being depleted.  Another motivation in the search for renewable energy compounds and technologies is the concern about global warming related to increased CO2 concentrations in the atmosphere due to the burning of fossil resources.  Although the use of biomass has been extensively anticipated as a renewable and sustainable resource, the supply of biomass is not sufficient to satisfy global demand for energy. Moreover, it does not always decrease warming potential to produce biomass because of the extensive use of fertilizers that can increase nitrous oxide emissions.  Although solar, wind, and water power are also significant renewable energies, they are used mainly for generating electricity, not for producing bulk substrates. 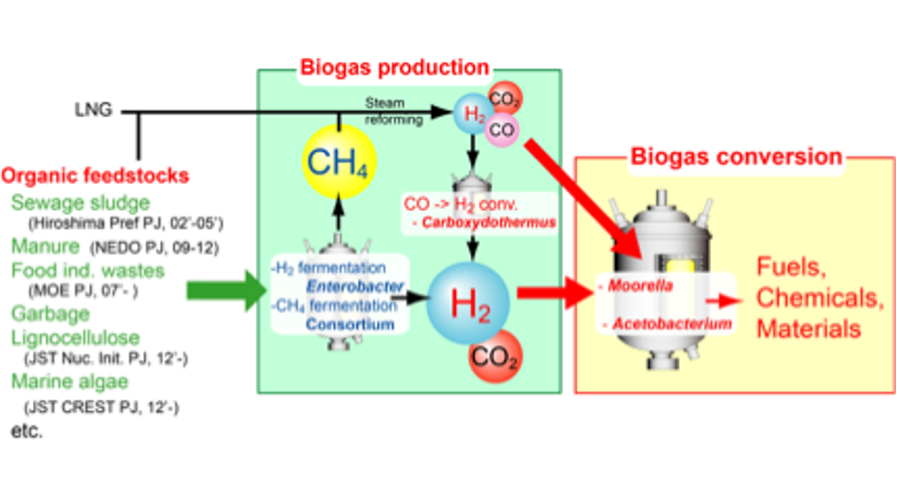 New methods, therefore, should be developed for both the production of bulk chemicals and energy from renewable resources that are not restricted to biomass.  One approach to solve these problems is the use of H2 as an energy source and CO2 as a carbon source.  H2 is a simple and abundant source that will be available even after the complete depletion of fossil resources because it can be generated from various kinds of natural energy via thermal or biological decomposition of biomass and electrolysis of water.  If CO2 can be used as a carbon source, it will contribute to global carbon recycling without emission of CO2.  Thus, we focuses on acetogens, a group of anaerobic bacteria that can autotrophically grow on H2 plus CO2. 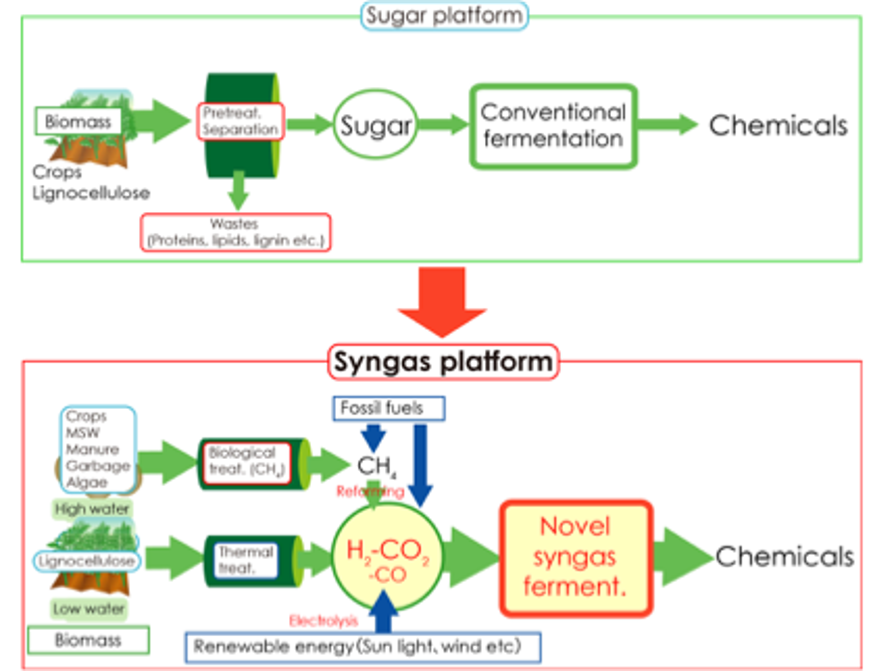 Typically acetogens produce mainly acetate from H2 plus CO2 or CO via the acetyl-CoA pathway.  A large number of mesophilic and thermophilic acetogens have been isolated.  Among them, mesophilic acetogens such as Clostridium ljungdahlii and C. autoethanogenum can produce ethanol from syngas, mostly a mixture of CO, H2, and CO2, derived from biomass.  Recently, the whole genome of Clostridium ljungdahlii was sequenced, and an electroporation procedure was developed to transform the organism with plasmids bearing heterologous genes to produce butanol.  This means that mesophilic acetogen can be used as a microbial production platform based on syngas and H2 plus CO2. 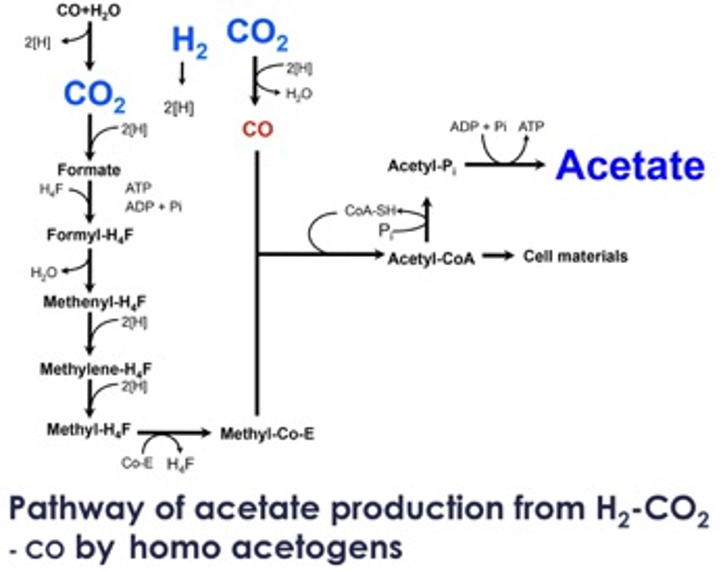 On the other hand, the use of thermophilic acetogens as a microbial production platform besides acetate based on H2 plus CO2 (or syngas) has scarcely been considered.  Indeed, the genome of Moorella thermoacetica has already been sequenced, the physiology has been well characterized. Furthermore, we recently reported that Moorella sp. HUC-221, a relative of M. thermoacetica, produced ethanol besides acetate from H2 plus CO2.  The use of thermophilic acetogens for fermentation using H2 plus CO2will facilitate the recovery of alcohols such as ethanol or propanol with a boiling temperature lower than culture broth, thereby enabling the continuous distillation of alcohols.  Furthermore, thermophilic bacteria have higher growth and metabolic rates than mesophilic bacteria, and the risk of microbial contamination is lower.  In this context, thermophilic acetogens are promising candidates for H2 plus CO2 (or syngas) fermentation compared to mesophilic bacteria.  However, a major limitation for extensive application of thermophilic acetogens has been the lack of genetic transformation systems that would enable the modification of metabolic pathways and microbial physiology for the efficient production of a whole variety of different renewable fuels and chemicals from H2 plus CO2.